I am taking a break from the binary I am currently analysing in Random Malware Analysis unpacking - Stage 1/3, as it takes me quite a lot of time to figure out some things for stage 2. Today I will be focusing on writing up my solution for Exceptions, a binary to reverse that was given at ECW prequals 2019.

Some good anti-dbg documentation and my head was enough to solve it. Let’s dive into the binary.

Loading it into binary, we quickly notice that the binary is stripped. CFF explorer informs us that it has been compiled using MV C++ 8: 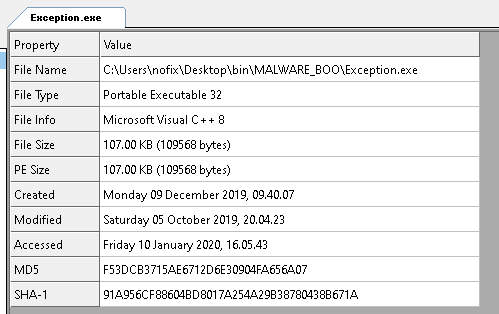 I loaded FLIRT “universal” signatures for Microsoft Visual C++ into IDA to get some of the functions name resolved. IDA did not find the WinMain() function, but cleared up a bit the entry point start: 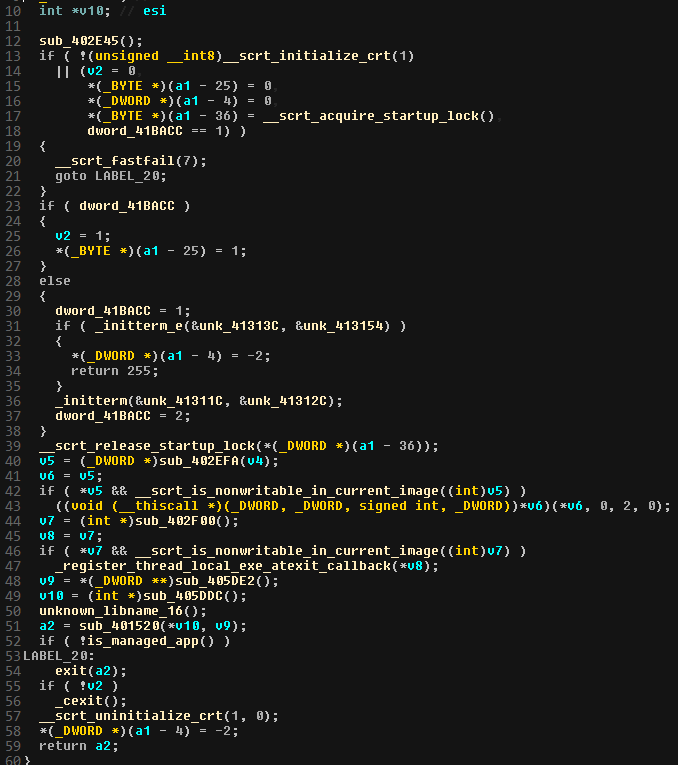 Everything looks quite normal, and if we are used to reverse PE files we can quickly notice the call to sub_401520 which appears to be approximativly where a WinMain function would be call. Notice that it takes 2 arguments : probably standard argc and argv.

Going into it looks like it is indeed the main function of our PE. We could also have taken a bottom-up approach to find the main as the binary is stripped : in the strings tab, we can notice a Usage: %s [FLAG]. Coming from there and using xrefs, we can quickly take our way up to the main function.

The WinMain function is quite straightforward: 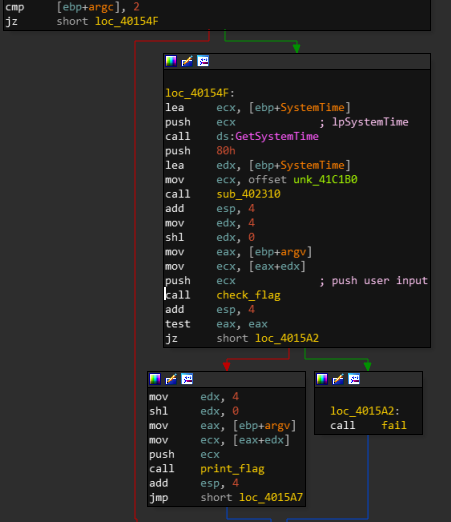 Let’s look at the check_flag function : 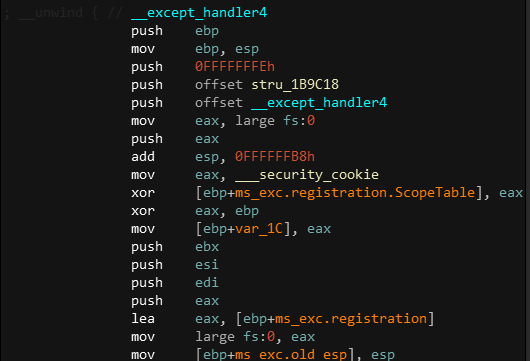 The required length on our input looks weird, and we can suspect that this code is not the code that should be executed at run time. Given the number we need to reach as the length (0x51320262), we would need have an input large enough for v3 to go negative, thus maybe reaching the expected number. That looks unrealistic. This gives us two options :

Assuming the first option is valid, we can try to set a hardware breakpoint to the value we have to reach :

I also set one to the division operand : 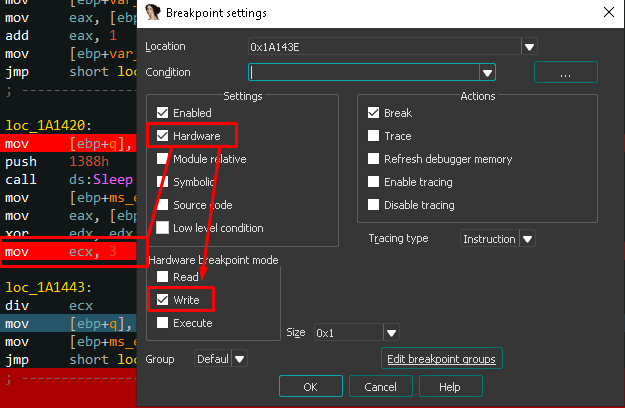 We now run the binary in windbg, and… Nothing. This could indicate that there is some kind of anti debugging trick going on here.

I start by checking the classics : the use of IsDebuggerPresent.

We can notice an unusual use of IsDebuggerPresent in sub_1A1700+20.

Note : this function is called at an early stage of the binary, way before the WinMain function.

Let’s check this out :

That means that this handler will be used for all exceptions in the application.

The binary then modifies mov ecx, 3 to mov ecx, 0 in the check_flag function. This is done right before div ecx, in order to trigger a zero division and execute some exception handlers in which code is hidden.

We continue the execution of the application and stumble upon a zero division exception, as expected. The exception gets catch by the first defined handler, which is the frame exception handler, defined in SEH table of the function check_flag (SEH is quite well defined in Practical Malware Analysis, a must have book !).

As the application execute every handler that matches the try condition, the handler associated to our Vectored Handler, which is global thus obviously match any exception, will be executed.

Let’s give a look at this Handler: 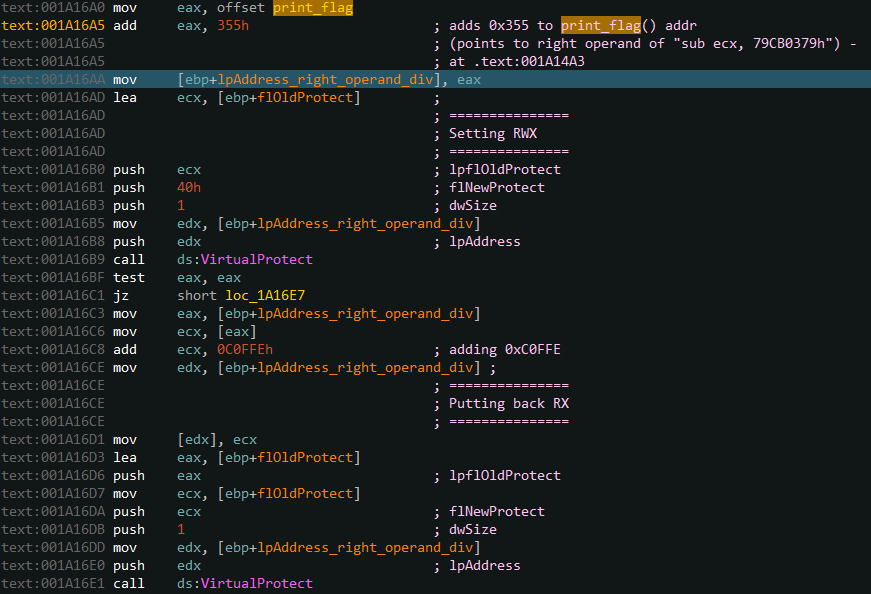 We set a breakpoint to the call to IsBeingDebugged from the parent, change its result, which allow the vectored exception handler to be set. We let the program continue and get back to check_flag function.

We now have this piece of code first checking the lenght of our input :

It is now clear that our input needs to be 8 characters long.

The next part calculates our 8 characters :

The first condition is fairly easy to calculate :

The second gives wrong results. This is because a second anti-dbg trick was hidden deeply in the code.

What is a TLS?

This has nothing to do with encryption. TLS means : Thread Local Storage. This is an old anti-dbg trick.

PE-studio warns us about the binary containing a TLS callback : 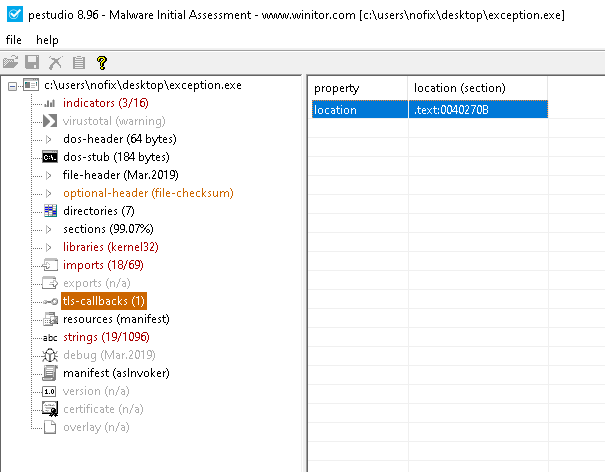 We quickly find the TLSexception handler : 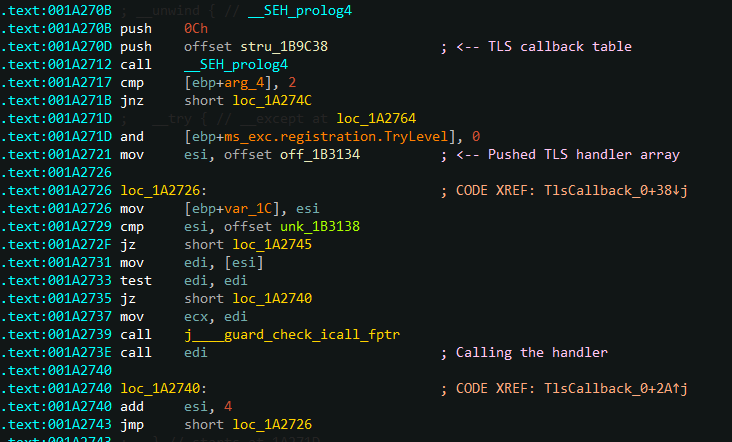 This handler uses the same technique as shown above: 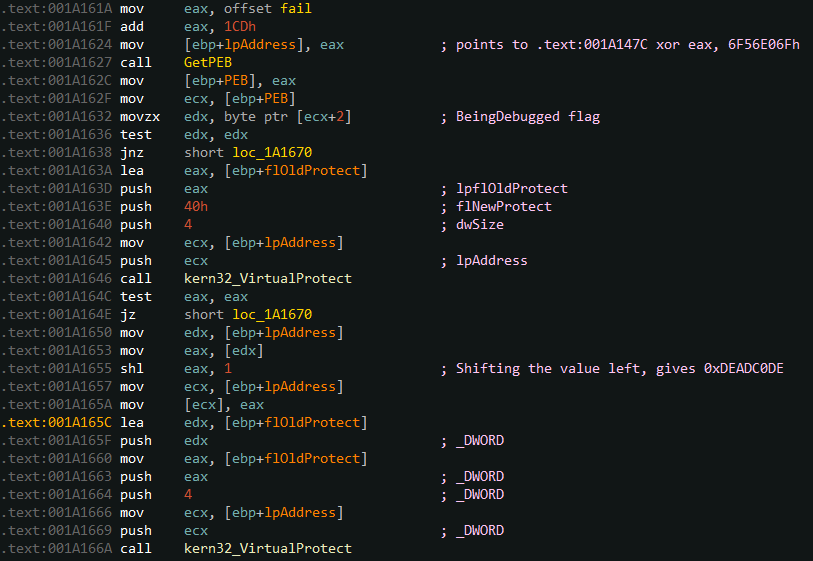 We just need to set a breakpoint after the program gets the BeingDebugged flag, and modify its result. We can let the program continue. Getting back to the check_flag, the modifications has been made, and we now need the first part of our input to match: __ROL4__(*a1 ^ 0xDEADC0DE, 5) == 0x79D71377.

Which gives us the input : ExceptCW.